Are you planning a trip to Kennedy Space Center Visitor Complex? From breathtaking launches to immersive attractions, there are a lot of ways to spend a full day at the visitor complex. These are some of the top experiences to check out during your visit. 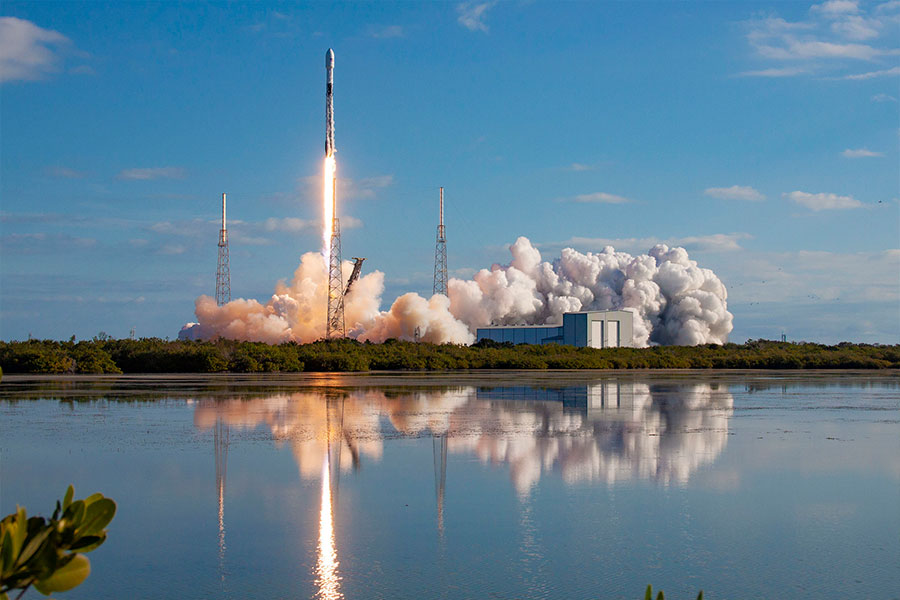 There is nothing quite like seeing a rocket lift off the pad, soaring further and further away from Earth’s surface. The intense silence during countdown is broken by the roar of the rocket growing louder the higher it climbs in the sky.

If the timing is right, you can cross “see a rocket launch live” off your bucket list – right here at Kennedy Space Center. This year, we enter a new era of space exploration as NASA’s Commercial Crew Program aims to launch humans from American soil once again. Keep an eye on our launch schedule for upcoming launch opportunities, as well as how to prepare for this once-in-a-lifetime experience. 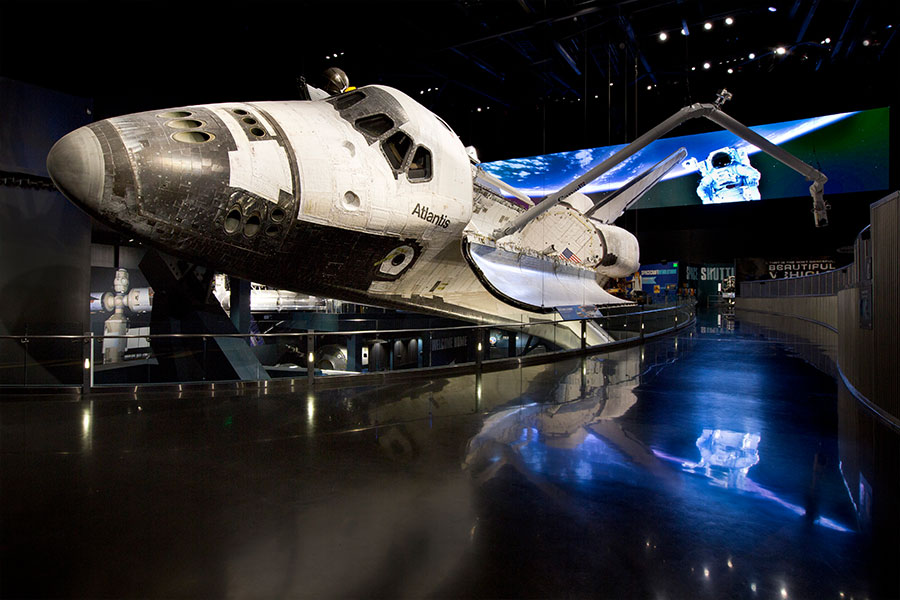 When you are at the visitor complex, a must-see attraction is Space Shuttle Atlantis®. With 33 missions to space under her belt, the orbiter is now displayed as she was in Earth’s orbit with payload bay doors open and the Canadarm extended. The entire attraction is a tribute to NASA’s 30-year Space Shuttle Program, so be sure to leave plenty of time in your schedule to explore.

Check out interactive displays, a full-scale mock-up of the Hubble Space Telescope and exhibits on what it was like to live and work in space aboard the International Space Station. Plus, get a taste of what it is like to leave Earth’s gravity in the Shuttle Launch Experience®! 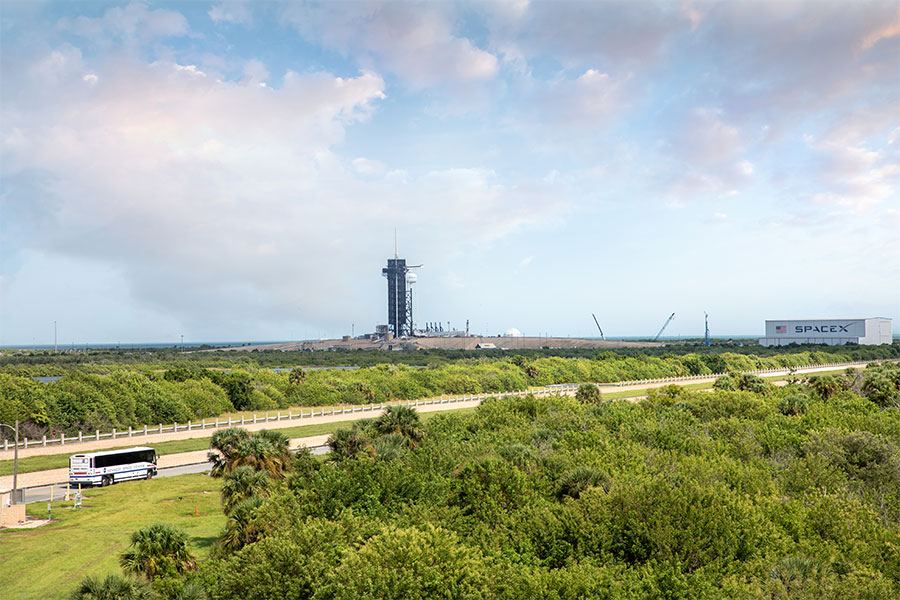 The Kennedy Space Center Bus Tour is your ticket into NASA’s restricted areas. See where the Apollo and space shuttle missions launched, while learning what NASA and its partners are preparing for right now. The bus tour takes you on a journey led by space guide Emily Calandrelli. See the Vehicle Assembly Building, active launch pads and the historic Crawler Way, where the Saturn V and space shuttles were rolled out to launch pads 39A and 39B.

GO BEHIND THE GATES 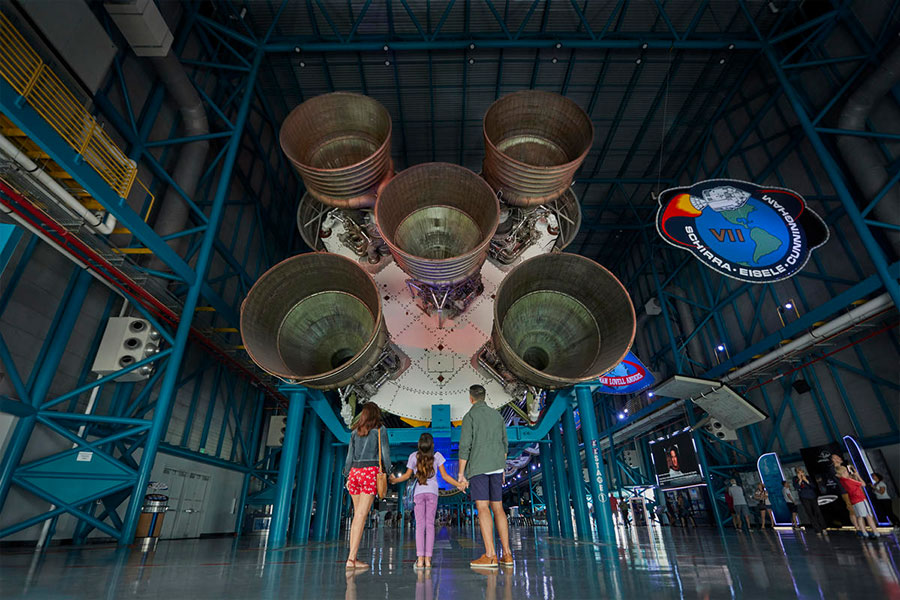 Take the Kennedy Space Center Bus Tour to the Apollo/Saturn V Center where you will stand in amazement under the gigantic Saturn V, the largest rocket ever flown. Through new interactive and engaging exhibits, relive the wonder and excitement of the Apollo era and celebrate the unprecedented achievement of putting humans on the Moon. While there, relive the launch sequence of an Apollo launch, get up close to spacecraft that took astronauts to the Moon and touch the Moon through a real lunar sample.

RACE TO THE MOON 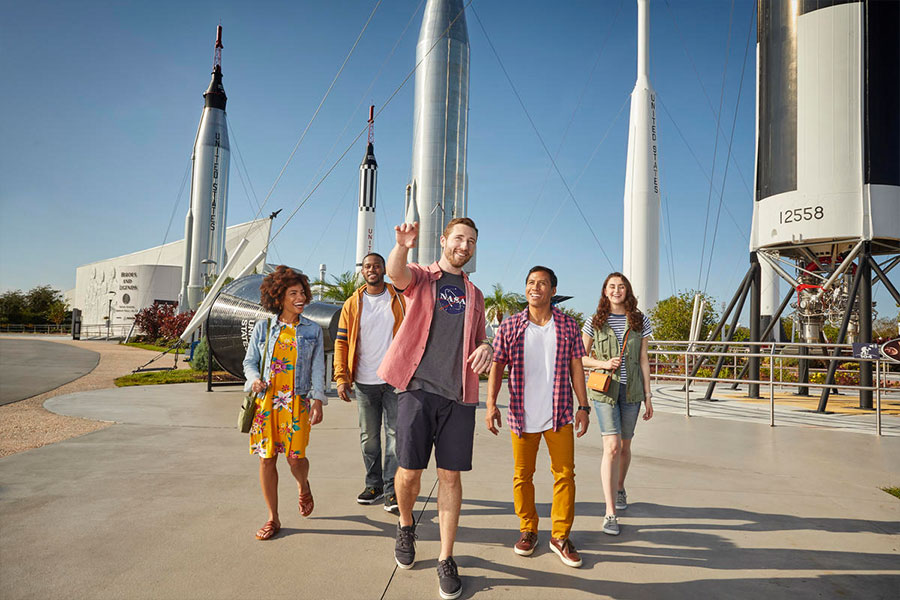 Where else can you explore towering vehicles from the dawn of America’s space program? NASA’s Mercury, Gemini and Apollo programs are represented by this garden of giants, honoring the scientists and engineers who made spaceflight a reality. Explore further by visiting Heroes & Legends featuring the U.S. Astronaut Hall of Fame® presented by Boeing®. Inside, learn what qualities define a hero through astronaut’s personal artifacts and visit the U.S. Astronaut Hall of Fame.


Besides the top items above, you can meet a real veteran astronaut on site every day in Astronaut Encounter, meet the Mars rover family in Journey to Mars: Explorers Wanted, see authentic NASA and commercial partner spacecraft in NASA Now and visit several more of our exhibits and shows.

Arrive early for your visit! There is enough here to fill a day (or two). The visitor complex opens at 9:00 AM daily, with closing times varying by the season. Purchase your daily admission tickets, annual passes or discounted packages online before you arrive. Just be sure to plan your day and visit the frequently asked questions before you arrive so you can take full advantage of your time at Kennedy Space Center Visitor Complex!


Kennedy Space Center Visitor Complex is operated for NASA by Delaware North and is entirely visitor-funded. Cape Canaveral Space Force Station and Kennedy Space Center are operational spaceflight facilities. Hours of operations, tours and attractions are subject to change at any time, with or without notice, due to operational requirements of these facilities. Please consider suggested itineraries when traveling with young children, and note the length of time recommended for each attraction when planning appropriate experiences with your family.