Visitors may have noticed a sign next to a tree at the visitor complex explaining the origins of a non-native Sycamore planted in a bed next to the Milky Way ice cream stand. This sign tells the story of the “Moon Tree” planted here on June 25, 1976 during the nation's bicentennial celebration. But what exactly is a Moon Tree?

During the Apollo 14 mission in 1971, astronaut Stuart Roosa, a former U.S. Forest Service smokejumper, carried some 500 tree seeds of redwood, loblolly pine, sycamore, Douglas fir and sweet gum in his personal kit while he orbited the moon. The idea to take tree seeds to the moon was conceived by the then Chief of the Forest Service, Ed Cliff, to generate publicity and so that Roosa could honor his fellow smokejumpers and their commitment to serving in one of America's most dangerous jobs. When the seeds were returned to Earth, it was discovered that the canister had burst while exposed to vacuum during the decontamination process, so the seeds were deemed unusable for experiments. The seeds were shipped to Forest Service laboratories in Mississippi and California where attempts to germinate them were successful. The seedlings were nurtured until they were large enough to be transplanted to schools and government buildings across the country during the U.S. Bicentennial and presented to other countries throughout the world. Second-generation Moon Trees, known as "Half Moon" trees, have been cultivated from seeds or cuttings. One Half Moon Tree was planted in 2005 to honor Stuart Roosa and other deceased astronauts at Arlington National Cemetery, situated near the Tomb of the Unknown Soldier, just up the hill from Roosa's gravesite.

No actual research was conducted on the effect of space travel on these tree seeds, but it has been observed that the resulting trees grew no differently from their counterparts on Earth. Though Moon Trees were often planted with ceremony and marked as significant in communities where they grew, lack of scientific research also meant lack of documentation and the locations of most Moon Trees remain a mystery. However, the idea of Moon Trees sparks the imagination and provides inspiration wherever they are growing. Unfortunately the Moon Tree at the visitor complex fell victim to the fury of Hurricane Irma in September 2017 and could not be salvaged. Yet, the spirit of the Moon Tree lives on as we continue to share the NASA story of space exploration at Kennedy Space Center Visitor Complex. 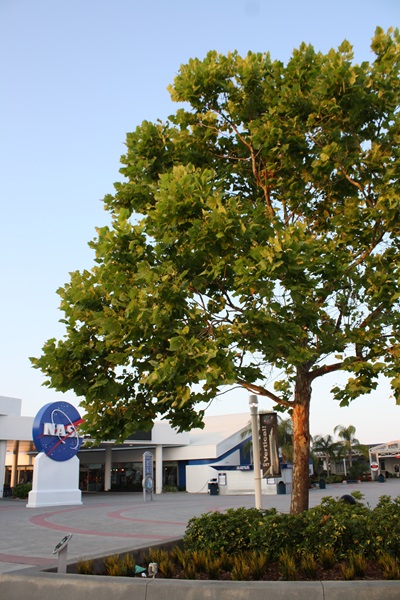 Official Statement from Kennedy Space Center Visitor Complex regarding the loss of the Moon Tree:

While Kennedy Space Center Visitor Complex sustained minimal damage during Hurricane Irma last week, we did suffer one important loss. Our Moon Tree, which grew from a sycamore seed that traveled to lunar orbit during the Apollo 14 mission in 1971 and was planted at the visitor complex in 1976 to honor the U.S. bicentennial, was lost during the storm. The seed from which it grew had been part of a scientific experiment to determine whether seeds would grow the same after being in microgravity for nearly two weeks; it was determined that there was no discernable difference. The Kennedy Space Center Visitor Complex Moon Tree was a beautiful, living artifact, and part of our nation’s history of space exploration. We were saddened to lose it. In keeping with our mission, we will continue to explore ways to share the important history of NASA’s Apollo program and the entire space exploration program.