The Loss of Columbia 15 Years Ago

With NASA’s rich history, each year brings significant anniversaries, ranging from the very creation of NASA to the discoveries of Mars rovers. While many celebrate triumphs in space exploration, we recognize a handful of tragedies surrounding those who risked and lost their lives in the quest to understand and explore beyond this planet.

As many know, Columbia STS-107 launched from Kennedy Space Center on January 16, 2003. The crew successfully performed a microgravity research mission among other experiments over the course of the 16-day mission, but Columbia and her crew were tragically lost upon re-entry on February 1, 2003. During a 7-month investigation, it was determined that a piece of foam from the fuel tank broke off during launch and damaged the orbiter’s wing’s leading edge. This breach caused the orbiter to break apart during re-entry.

This January, we honor the legacy of the fallen astronauts of Columbia STS-107, 15 years after the loss of all 7 of her crew. 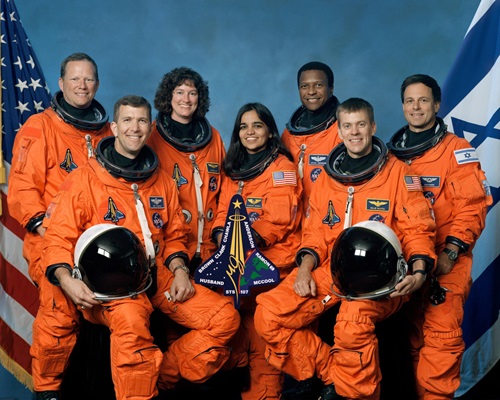 The Astronauts Memorial Foundation, as part of NASA’s annual Day of Remembrance, will honor not just the crew of Columbia, but all of the astronauts who sacrificed their lives furthering the cause of space exploration and discovery. The Astronauts Memorial Foundation is a private, not-for-profit organization that built and maintains the Space Mirror Memorial at the visitor complex, and provides free educational programs to all ages promoting America’s continued space exploration. The Space Mirror was dedicated in 1991 to honor all astronauts who lost their lives on missions or during training. It has been designated a National Memorial by Congress.

The 2018 NASA Day of Remembrance will be held on January 25, 2018 at the Astronauts Memorial Foundation Center for Space Education at Kennedy Space Center Visitor Complex. Guests are welcome to join us for the event, included with admission.

All year, any guest who wishes to honor these fallen astronauts can visit Forever Remembered inside Space Shuttle Atlantis®, a tribute to all of the shuttle astronauts lost . Learn about each of the astronaut’s passions, and how NASA returned to flight after such a loss.