With word quickly spreading about NASA’s bold Mercury program and the success of Alan Shepard’s historic suborbital launch on May 5, 1961, growing numbers of press and public flocked to the Cape Canaveral area to get a closer look at America’s burgeoning space program. By 1963, demand was such that Texas Congressman Olin Teague, Chairman of the House Subcommittee on Manned Space Flight, asked NASA Administrator James Webb to create a visitor program that would build on the support and goodwill of the public.

Webb’s solution was a drive-through tour of what was then known as Cape Kennedy, now called Cape Canaveral Air Force Station. On Sunday afternoons from 1 to 4 p.m., the public could drive their own vehicles on a predetermined route that provided a glimpse of the launch pads and facilities. Despite the limited access, the tours proved immensely popular. From late 1963 to late 1964, an estimated 100,000 visitors took advantage of the chance to tour the Cape.

Meanwhile, excitement began to build next door at Kennedy Space Center (KSC), which had earned its own status as an official space center in 1962, and had been named for the late President John F. Kennedy shortly after his assassination in November 1963. In January 1965, after a year of successful drive-through tours at Cape Kennedy, tours expanded to include areas of Kennedy Space Center. On the first day, nearly 2,000 visitors came. Based on this success, the Spaceflight Committee authorized $1.2 million for the creation of a visitor center at Kennedy Space Center.

With help from the National Park Service, NASA created a plan to accommodate a projected 2.9 million visitors by 1967 and 3.2 million visitors by 1970. The proposal included a Visitor Information Center (VIC), as well as a guided bus tour of the center and its operations. A private concessioner was contracted to operate these programs.

Several possible locations for the visitor center were discussed, including a 20-acre site south of Titusville. Ultimately, a site within Kennedy Space Center was chosen, not only because it provided virtually unlimited acreage for future expansion, but mainly because no matter what else visitors saw or did, they could say they had actually set foot on Kennedy Space Center.

Plans for the construction and content of the visitor center moved forward, and in the meantime, a temporary facility was established on Highway 1, two miles south of Titusville at the main entrance to the space center. It provided basic exhibits and restrooms and also served as a hub for public bus tours, which began on July 22, 1966.

During the first week of operation, a reported 13,555 guests took the guided bus tour, with 75 percent of those guests opting for the 3-hour tour that provided a look at both KSC and the Cape. Within three months, nearly 100,000 visitors had taken the bus tour. Within one year, 475,000 guests toured KSC and the Cape, far exceeding NASA’s expectations. 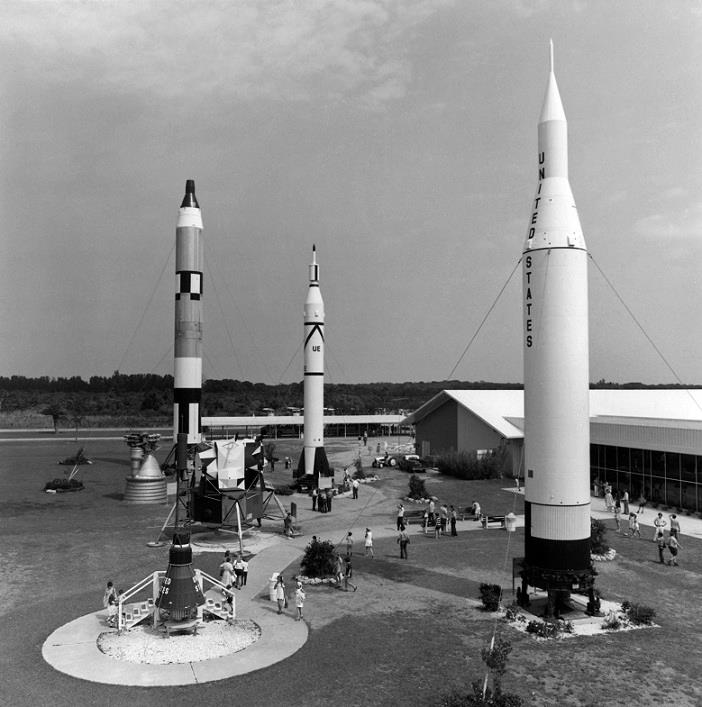 With visitation growing stronger each day, the new VIC was unveiled August 1, 1967. It spanned 42 acres and featured examples of Mercury, Gemini, and Apollo hardware, as well as exhibits, two theaters, and concession and souvenir facilities housed within two main buildings.

As NASA grew closer and closer to meeting its goal of landing a man on the moon, visitation to Kennedy Space Center increased even more. Three days after the crew of Apollo 8 orbited the moon on Dec. 24, 1968, more than 10,000 visitors descended on the VIC, but with buses running at capacity, tours could only accommodate 7,274 guests. Within 18 months, an expansion plan for the VIC was approved, including a new reception area and exhibit hall; a Hall of History with more exhibits, a theater and classrooms; and other infrastructure improvements. By 1969, the visitor center had become one of the premier tourist destinations in Florida, ranking the second most attended attraction in the state, following Tampa’s Busch Gardens.

In 1991, The Space Mirror Memorial, also known as the Astronaut Memorial, was dedicated. The black granite monument is emblazoned with the names of each of the 24 astronauts who made the ultimate sacrifice, including the crews of Apollo 1, STS-51L/Challenger and STS-107/Columbia, as well as seven other astronauts who died in jet and commercial plane crashes. 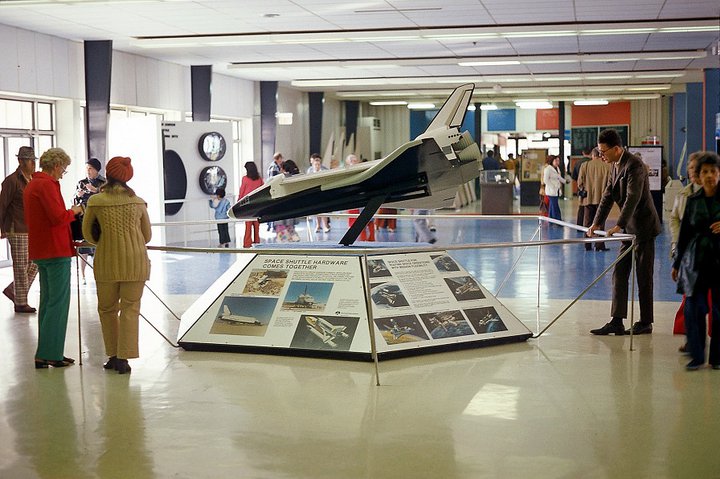 By 1995, with no government funds allocated to build new facilities and exhibits, the visitor center had become something of a hardware museum. While taxpayer funds had paid for the original NASA hardware, no additional funds had been allocated to maintain them. National artifacts and treasures such as an unused Apollo/Saturn V rocket – one of only three in the world – lay outdoors, exposed to sun, rain and salt that corroded and rusted it. The rocket had been placed there in the summer of 1976 as part of the U.S. Bicentennial Exposition on Science and Technology, held at KSC.

The same year, NASA awarded the contract for operations of its visitor center at KSC to a new concessioner. Between 1995 and 2007, a combination of private investment and visitor-generated funds enabled numerous physical improvements to the facility, rebuilding the visitor program.  The “creature comforts” were the first aspects to be revamped, including restrooms, restaurants, buses and retail shops.  Before the concessioner transition, plans were already in the works for the construction of the Apollo/Saturn V Center, which opened in January 1997. The opening of this attraction marked a first for NASA – it was the first time a major exhibit was opened within a restricted area, accessible to guests only through Kennedy Space Center tour buses. This attraction brought the priceless, 363-foot-long Saturn V moon rocket indoors, away from the elements and the bird nests that had taken it over, and into a 100,000-square-foot facility featuring two dramatic theater presentations about the Apollo moon program, countless other displays, and the Moon Rock Cafe. By this time the visitor center had also undergone several name changes, including Spaceport USA and its current moniker, Kennedy Space Center Visitor Complex.

The Kennedy Space Center Bus Tour was further enhanced with two additional tour stops in 1998 – the Launch Complex-39 Observation Gantry, a panoramic photo stop with a view of space shuttle launch pads as well as presentations and exhibits explaining the launch process, and the International Space Station Center, offering guests a behind-the-scenes look at actual components of the station being assembled prior to their launch and installation. The events of Sept. 11, 2001, brought a temporary closure to both stops as security was enhanced. Later, with the completion of the International Space Station and the end of the shuttle program, these tour stops were removed from the KSC Bus Tour.

Another major improvement to the visitor program was the introduction of the Astronaut Encounter program in 2000, bringing a veteran NASA astronaut face to face with the public every day of the year. The 30-minute program, which is still offered today, features a short introduction and presentation followed by a question-and-answer session and a photo opportunity with the astronaut. The first-of-its-kind interactive show has featured astronauts from the Mercury, Gemini, Apollo, Skylab and Space Shuttle Programs, as well as those who have lived on the International Space Station. The Lunch With An Astronaut program was implemented not long afterward, providing guests a hot buffet meal during which the astronaut provides a more in-depth presentation of his or her experience, followed by a question and answer session and individual photos with guests.

In 1999, the visitor complex set out to offer guests an even more historical perspective and a deeper look behind the scenes with the Cape Canaveral: Then and Now tour. This in-depth,

3-hour guided bus tour transported guests to historic areas of the Cape Canaveral Air Force Station, including the U.S. Air Force Space and Missile Museum; Blockhouse 5/6, the actual Mercury Mission Control Center and the site of Alan Shepard’s historic launch; and Launch Complex 34, the site of the Apollo 1 tragedy that took the lives of three brave astronauts. This tour is still offered today as one of three KSC Special Interest Tours, now known as the Cape Canaveral Early Space Tour.

In 2000, the NASA Up Close tour was added. This behind the scenes look at Kennedy Space Center operations has since been revamped as the KSC Up-Close Explore Tour, featuring a stop and photo opportunity at the NASA Causeway alongside the scenic Banana River, and outside the Vehicle Assembly Building. A final photo stop at a camera bunker near Launch Complex 39 provides a panoramic shot of launch pads 39A & B. Guests on this tour also get to drive by the Launch Control Center, the NASA Press Site and countdown clock, as well as Kennedy Space Center Headquarters, among many other sites. The KSC Up-Close Launch Control Center Tour was added in 2012, giving visitors an insider’s look at Kennedy Space Center’s Firing Room #4, where the last 21 space shuttle missions were launched, as well as a drive past Launch Complex 39 and a photo stop nearby. Both tours are still offered today as one of three KSC Special Interest Tours, now known as the KSC Explore Tour and KSC Launch Control Center Tour.

From 1995 to 2000, several new exhibits and attractions were added, dramatically changing the landscape of the visitor complex, including Nature & Technology, Early Space Exploration, the Dr. Kurt H. Debus Conference Facility, and many others, as well as a renovation of the Rocket Garden. New restaurants also were added during that time period, including the Orbit Cafeteria. A second floor was added to The Space Shop, making it the world’s largest retail shop entirely devoted to space memorabilia and gifts.

To ensure the ability to preserve and maintain the exhibits, the visitor complex implemented a gated admission policy in 2000. Whereas guests had previously paid only for the KSC bus tour and IMAX® movies, they would now pay a flat admission fee, which included the entire visitor complex experience, with the exception of special interest tours, education programs, and Lunch With An Astronaut.

In September 2002, the United States Astronaut Hall of Fame became part of the experience at Kennedy Space Center Visitor Complex. The attraction features the world’s most comprehensive collection of astronaut memorabilia ever assembled and honors all space explorers, particularly those who have been inducted into the Hall of Fame. This building also housed the Astronaut Training Experience® (ATX).

The year 2007 brought one of the visitor complex’s most exciting improvements to date, Shuttle Launch Experience®, a thrilling, highly realistic simulation of a space shuttle launch that makes guests feel as if they are traveling at 17,500 mph on their way to orbit the Earth. It was designed under the advisement of veteran NASA astronauts who have said the ride is the most realistic launch simulation created.

In April 2012, Kennedy Space Center Visitor Complex celebrated a remarkable milestone when it was entrusted with the care of the authentic space shuttle Atlantis, one of only three remaining space-flown orbiters in the world. In June 2013, the visitor complex unveiled the Space Shuttle Atlantis® attraction containing four cinematic productions and more than 60 interactive experiences that invite guests to “be the astronaut” and to celebrate the people, passion and patriotism behind the shuttle program. Earlier in the same year, the visitor complex opened a dramatic new entry, featuring a grand plaza and fountain; ticket booths and self-service kiosks; Will Call, guest services and information booths; the Voyagers retail shop; the Rocket Garden Cafe; and a new walkway that helps lead guests on a more deliberate path through the park.

In the entrance plaza, guests can enjoy taking photos in front of a 3D representation of the NASA insignia or “meatball” that spans 13 feet in diameter. To the right of the globe stands a majestic 75-foot-long fountain that pays homage to the dreams of late President John F. Kennedy. Kennedy’s face, along with a quote from his famous 1962 “moon speech” at Rice University, is laser-etched onto a skyward-reaching arch of blue granite that stands 30 feet at its highest point.

More new experiences are planned for the visitor complex in 2017 and beyond. Just as NASA continues to grow, expand and evolve, so too will its premier visitor center – Kennedy Space Center Visitor Complex.