Gateway: The Deep Space Launch Complex opens at Kennedy Space Center Visitor Complex on June 15, 2022. Ahead of the grand opening, get an exclusive look at just some of the exhibits you will see inside. Between space-flown artifacts, scale models and engaging touchscreen displays, the present and future of space travel comes to life inside this bold new attraction. 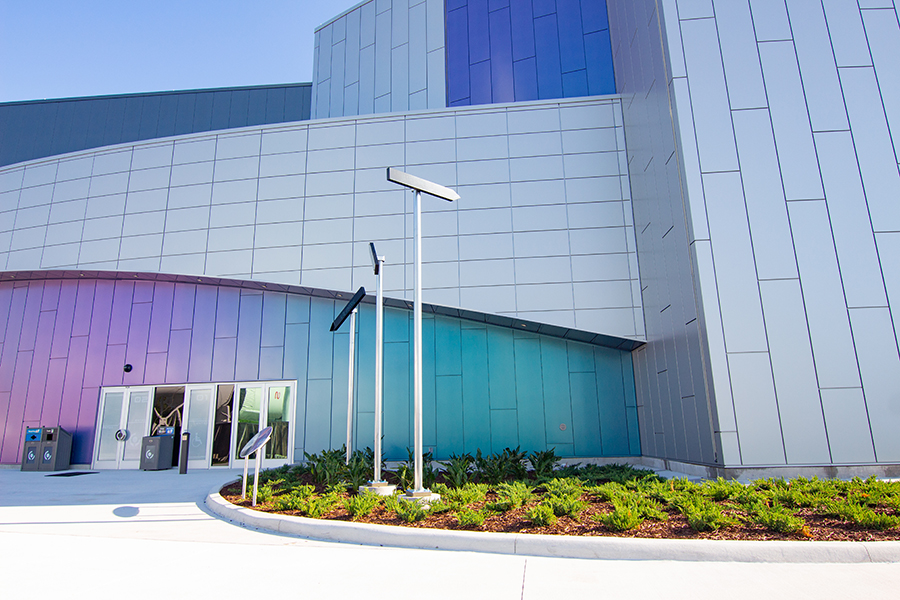 Developed by NASA's Jet Propulsion Laboratory (JPL), this cosmic wayfinder uses NASA's Deep Space Network to locate the positions of planets, satellites, the International Space Station (ISS), and celestial bodies moving throughout the universe in real time. The original sets of these rotating signs are at JPL.

Did you notice how that tiles on the outside of the building range from purple to teal? The individual tiles are the same, but change color based on light and your position around the building. Just as what you see inside Gateway will always change, the outside will too! 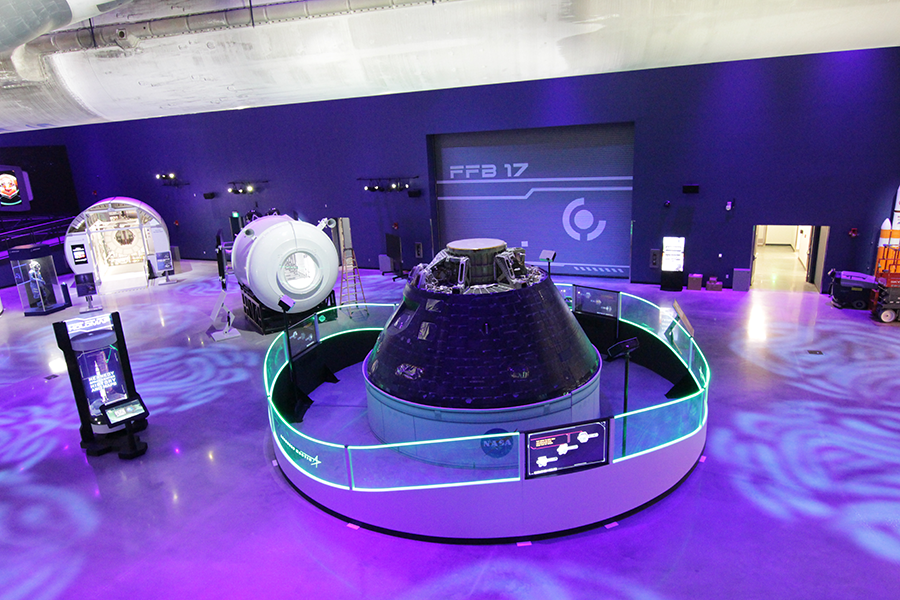 You can't miss the flight-flown Orion spacecraft from Exploration Flight Test - 1 (EFT-1). Launched in 2014, this was the maiden voyage of the Lockheed Martin capsule. Here, learn about this mission and Orion's key role in NASA's Artemis missions. Interact with three OLED screens to explore launch and liftoff, key elements of the capsule, a comparison of the Orion to the Apollo capsule, training and flight preparation, navigation, key features and systems for the crew's wellbeing, and the path back to Earth.

Launch the Space Launch System (SLS) rocket into space and put the Orion spacecraft on the path the Moon. There are four stages to complete. The player wins if they can successfully launch the rocket and put the Origin into its correct orbit. 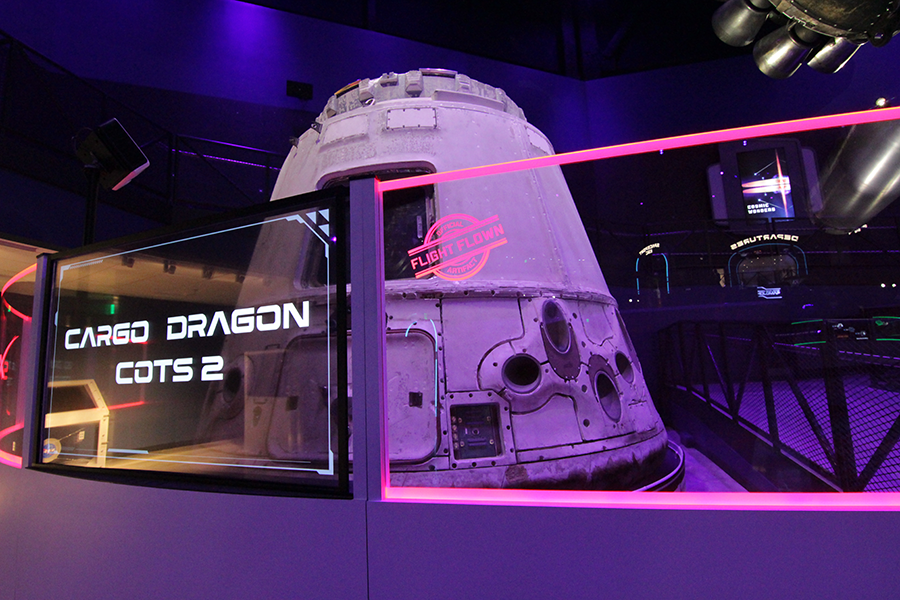 In May 2012, this dragon became the first commercial spacecraft to deliver and return cargo from the ISS. Learn about Dragon, including the evolution from this spacecraft to the current cargo and crew versions, and the design and features. Also, hear the story of launches, landings, and the reusability of the Dragon capsules, the first stage of the Falcon 9, and now the fairings. 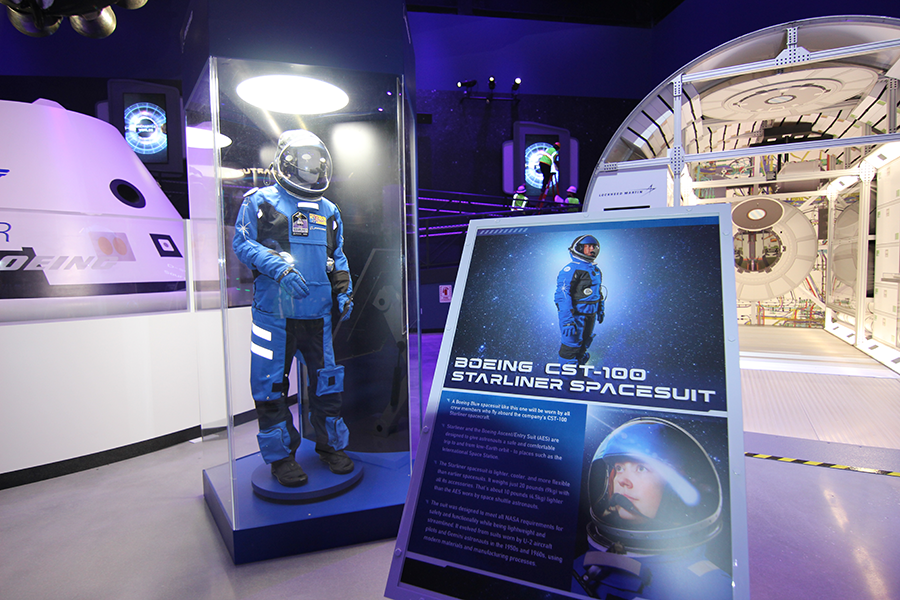 Constructed by Adam Savage, the 2021 ILC Dover version of the Boeing suit features authentic elements of the suits that will be worn by Starliner astronauts. Astronaut "Rosie", seen with the suit, is the anthropomorphic human Boeing uses for testing. With interactive displays, get up close and examine the helmet, suit, and gloves individually. Users can also "try on" the gloves by placing their hands over the kiosk controller.

This mock-up of the Boeing Crew Transportation (CST)-100 Starliner crew module brought the spacecraft from computer drawings to touchable reality. Boeing engineers and NASA astronauts spent thousands of hours inside. The CST-100 Starliner spacecraft was designed to accommodate seven passengers or a mix of crew and cargo. 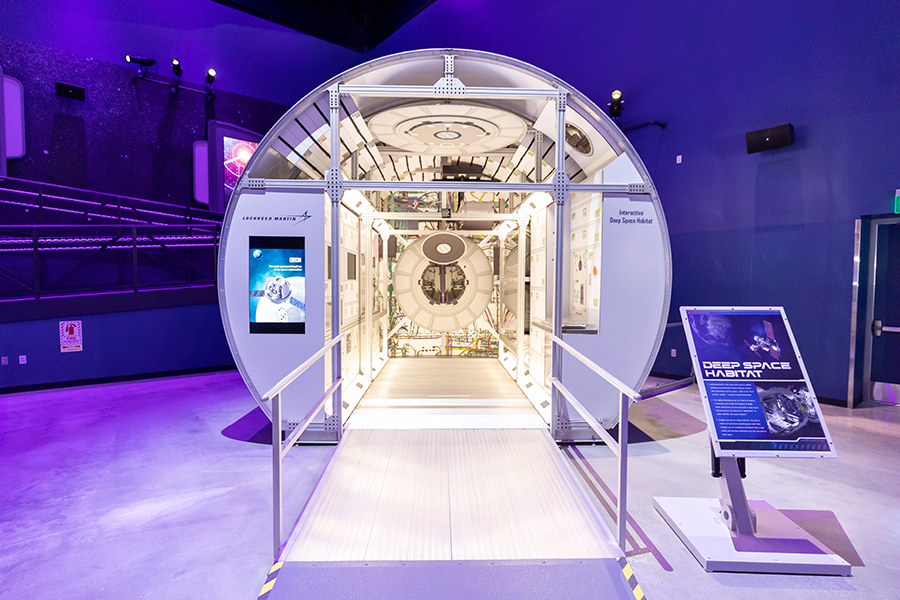 This full-scale mock-up of what a habitat orbiting around the Moon can look like. It shows that you need to take advantage of all the space - both on the "floor" and "ceiling" - to get the most functionality. 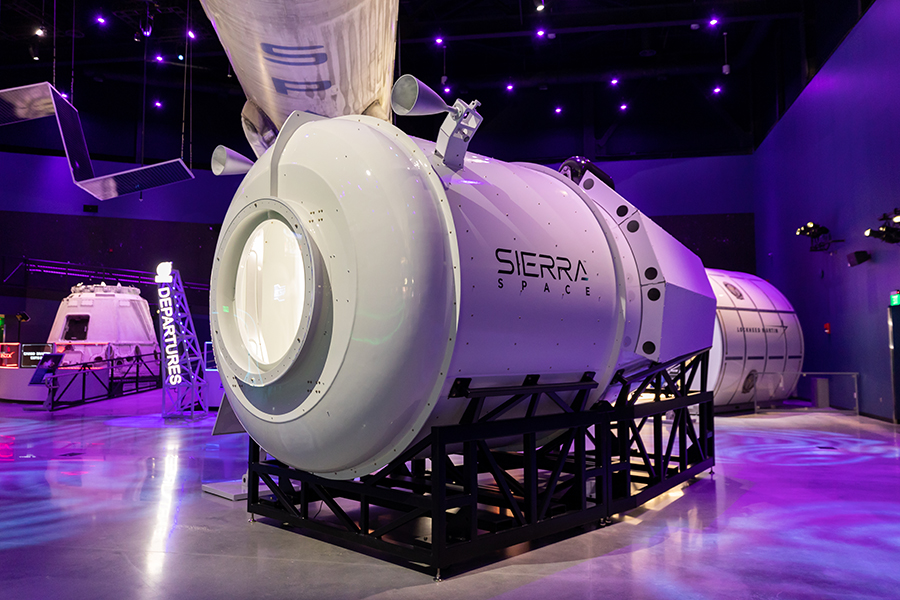 Sierra Space's Shooting Star™ is a 15-foot (4.6 meter) transport vehicle that attaches to the Dream Chaser® spaceplane. The module will carry up to 10,000 lbs. (4536 kgs) of pressurized and unpressurized cargo to the International Space Station under NASA's Commercial Resupply Services 2 contract. Sierra Space designed the module to burn up upon re-entry, disposing of trash and other unwanted materials from the ISS.

Before you go upstairs, don't miss the scare models of the Space Launch System, Delta IV Heavy and Atlas V rockets on the main floor. 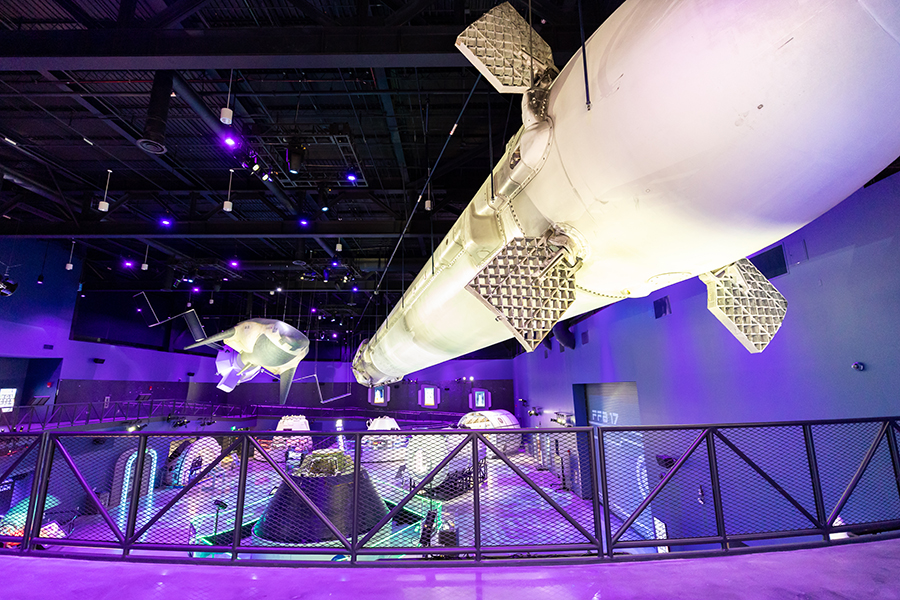 Seeing the SpaceX Falcon 9 booster suspended from the ceiling is a jaw-dropping experience. Booster B1023 launched in 2016 on it's first mission, Thaicom 8, and successfully landed on the drone ship, Of Course I Still Love You. For its second mission, the B1023 was converted to a side booster for the Falcon Heavy Demo in 2018, which famously launched a bright red Tesla Roadster into space.

This is a full-scale replica of the world's only winged commercial spaceplane, the Dream Chaser. In the near future, it will perform cargo supply and return missions for NASA, delivering up to 12,000 pounds (5,443 kg) of cargo to the ISS in one trip, and returning critical data from ISS researcher experiments. Dream Chase is a reusable spaceplane with the ability to land on existing commercial runways worldwide. 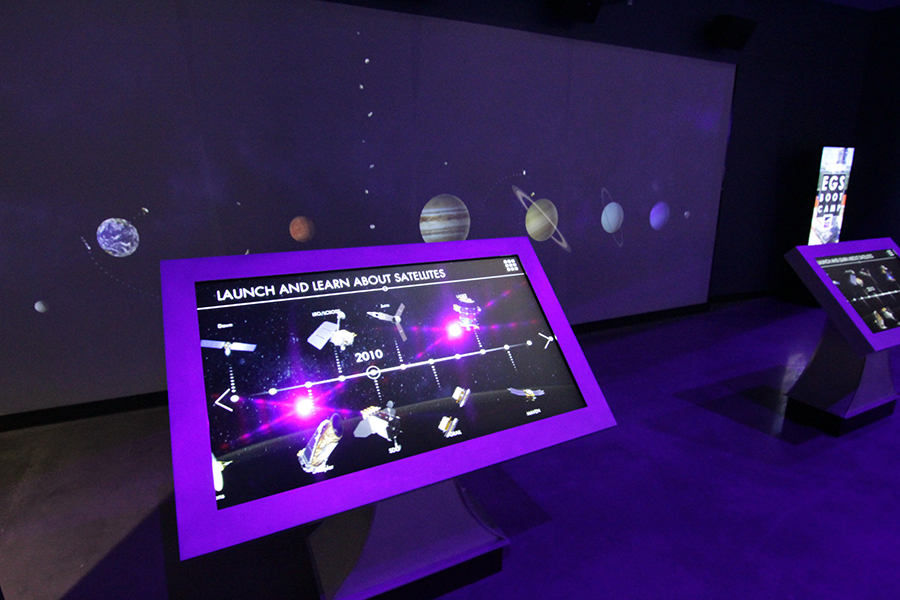 Featuring 40 notable space missions of satellites, space telescopes, probes and rovers, this interactive exhibit allows you to dive deeper into some key missions. Step beyond the kiosks and use your illuminated shadow to discover spacecraft as they travel between the planets. There are even "Easter eggs" with featured content for 10 of the missions in you are illuminating the triggers with light.

Get an up-close look at the James Webb Space Telescope, which launched December 2021, using the holotubes' 3D models. There, learn about its path from Earth, how the telescope actually works, and how its images compare to the famous Hubble snapshots.

These are just a handful of what you can see and do inside Gateway. Fully experience everything during your next visit! Gateway is included with admission to the visitor complex.

Out of This World Deals
By Shelby Stoeckman On November 23, 2022
Celebrating Our Veterans
By Ashlynn Webb On November 11, 2022
Home Science: DNA Extraction
By Gloria On October 31, 2022
Taste of Space | Meet the Celebrity Chefs
By Alaina On October 6, 2022
Countdown to Artemis I
By Alaina On August 23, 2022