Honoring the Life of Al Worden

Beloved Apollo astronaut Alfred “Al” Worden passed away March 18, 2020 and those of us at Kennedy Space Center Visitor Complex remember the life and accomplishments of one of our frequent guest astronauts.

Worden was born on February 7, 1932 in Jackson, Michigan. He earned a bachelor’s degree in military science at the United States Military Academy in 1955. Following, he joined the Air Force and by 1965, had graduated from the Randolph Air Force Base Instrument Pilots Instructor School and the Aerospace Research Pilots School. He also served as an instructor at the latter.

Worden joined NASA in 1966 and flew on the Apollo 15 mission to the Moon in 1971. As command module pilot, he played an important role in getting everyone home safely. During the mission, he orbited the Moon in the command module, taking photographs of its surface. He also performed the farthest spacewalk, 200,000 miles from Earth, to retrieve cassettes from two Moon-mapping cameras mounted on the outside of the spacecraft.

After retiring from NASA and the Air Force, he served in various roles, including chief of the Systems Studies Division at NASA’s Ames Research Center in California. Worden was inducted into the U.S. Astronaut Hall of Fame® in 1997, and also served as Chairman of the Astronaut Scholarship Foundation. 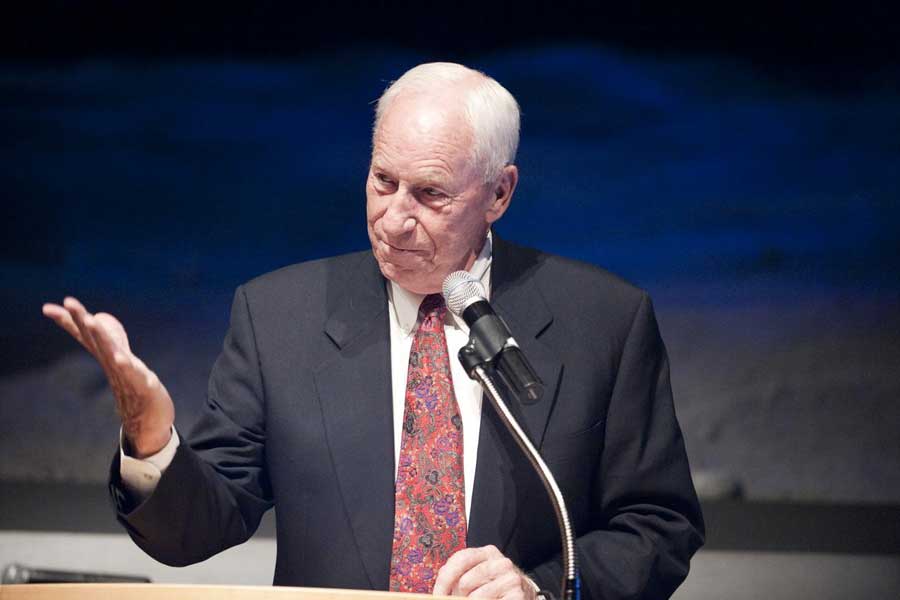 Many may not know that Al founded the Astronaut Al Worden Endeavour Scholarship to inspire future engineers and explores around the world, and to promote science, technology, engineering and math (STEM) education. He was also a frequent guest on Mr. Rogers Neighborhood, explaining to kids his spacesuit, how astronauts eat in space and what it was like being alone in the command service module while orbiting the Moon.

He also holds two Guinness World Records: one for performing the first deep space spacewalk and another for being the most isolated person in the universe. Both were achieved during Apollo 15. Hear him speak to his records, and ask a very important question, in an episode of Kennedy Space Center Visitor Complex’s Tell Me a Story.

Al Worden was a long-time friend of the visitor complex. We were honored to have welcomed him as a frequent Astronaut of the Day, and during many special event appearances and segments in the Tell Me a Story video series. Our heartfelt sympathies go out to his family and all whose lives were touched by Al's larger-than-life and loveable character.

To hear more from Al Worden, an incredible storyteller, visit Kennedy Space Center Visitor Complex’s YouTube page under the Tell Me a Story video series. Some highlights include:

Al Worden Gets a Phone Call

What Campers Think of Virtual Camp KSC
By Alaina On August 10, 2021
The 50th Anniversary of Apollo 15: A Record-Breaking Mission
By Adeline On July 26, 2021
Attraction Spotlight: Space Shuttle Atlantis
By Alaina On July 2, 2021
What is Artemis? And Other Questions About Humanity's Return to the Moon
By Alicia On June 1, 2021
Remembering Apollo Astronaut Michael Collins
By Christine On April 29, 2021