As of February 3, 2022, NASA Now is closed in preparation of a new exhibit in the IMAX West Gallery. This blog is available for archival purposes.

Did you know that Kennedy Space Center Visitor Complex has one of the largest collections of space-flown vehicles in the United States? In addition to space shuttle Atlantis, visitors can see the Apollo 14 crew capsule in the Treasures Gallery at Apollo/Saturn V Center and artifacts from Project Mercury, including a Redstone rocket and capsule in Heroes & Legends featuring the U.S. Astronaut Hall of Fame®. Access to these historic spacecraft underscores the mission of the visitor complex, but what about spacecraft that are flying right now?

NASA Now is a gallery inside IMAX® Theater that houses temporary displays of spacecraft on loan from NASA and partners like Boeing® and SpaceX. Inside, visitors can see spacecraft created for NASA's Commercial Crew Program and Commercial Resupply Services (CRS) transportation to the International Space Station (ISS), and NASA's Space Launch System (SLS), the future transportation for deep space exploration. Not only does NASA Now house spacecraft representing all of these programs integral to the future of American spaceflight, some of these spacecraft are actually space-flown.

Visitors to NASA Now are greeted by Orion EFT-1, the Orion Multi-Purpose Crew Vehicle designed to launch aboard SLS for deep space exploration. Though SLS testing will begin soon, this vehicle was launched aboard a Delta IV heavy rocket in December 2014, from Cape Canaveral Air Force Station's Space Launch Complex 37B. This mission was designated as Exploration Flight Test 1 to test avionics, heat shielding for atmosphere re-entry, and parachutes for landing. Built for NASA by Lockheed Martin, Orion EFT-1 was welded at NASA’s Michoud Assembly Facility before being completed and launched at Kennedy Space Center. Displayed next to Orion is a scale model of the upcoming SLS rocket, currently being designed as Orion’s launch vehicle.

Boeing has provided a full-scale engineering model of the CST-100 Starliner crew vehicle with access to the interior. Built in 2010, this CST-100 Starliner mock-up brought the spacecraft from computer-aided design drawings to tangible reality. Even while on display at the visitor complex, the mock-up allows engineers access to a physical model for testing spacecraft design for astronauts and cargo as well as engineering verifications. 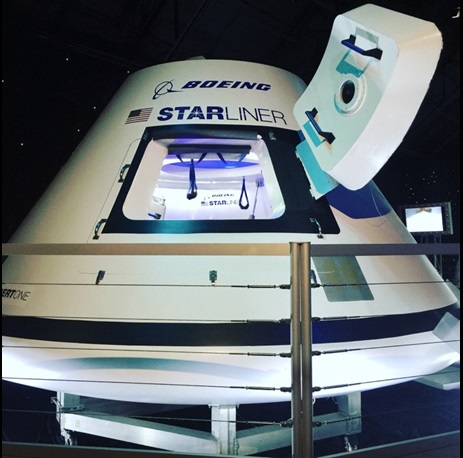 On loan from SpaceX, the COTS-2 Dragon is not only space-flown, this vehicle is also the first commercial spacecraft to rendezvous with the ISS. COTS-2 launched in May 2012, for its historic maiden flight test run to low Earth orbit (LEO) and docking at the ISS. Dragon proudly bears the scorch marks from atmosphere re-entry, representing the beginning of NASA’s Commercial Resupply Services where commercial partners resupply the ISS, and paving the way for the development of the Commercial Crew Program scheduled to begin testing in 2018.

A scale model of the Dream Chaser cargo vehicle is a Space Utility Vehicle (SUV) designed by NASA’s most recent CRS partner, Sierra Nevada Corporation. This upcoming vehicle is currently being tested at NASA’s Armstrong Flight Research Center and will launch aboard ULA’s Atlas V rocket. Unlike the other capsule vehicles, Dream Chaser Cargo System is a lifting-body designed to glide back to Earth after delivering cargo to the International Space Station.

As you exit the NASA Now exhibit, don’t forget to look up! Suspended above the staircase for IMAX Theater is a Vector-R rocket from Vector. The Vector-R is a simple two-stage rocket designed for smaller payloads, and is scheduled to launch from Cape Canaveral Air Force Station’s Launch Complex 46.

Known as the birthplace of American spaceflight, Kennedy Space Center is now a multi-user working spaceflight facility currently launching cargo to the International Space Station. Soon Kennedy Space Center will once again launch astronauts into space. Look for exciting new additions to the temporary exhibits in NASA Now and make sure to visit regularly to see the latest spacecraft on display.