“My very first flight into space was in November of 1985. We launched a couple days before Thanksgiving and we planned ahead. We requested turkey and had pumpkin pie with pumpkin bread. We had all the fixings, making for a very nice celebration for Thanksgiving in orbit,” Ross remembers.

The first orbital-turkey day took place aboard Skylab 4 with astronauts Gerald Carr, William Pogue, and Edward Gibson on November 22, 1973. Gibson and Pogue suited up and stepped out of the Skylab for a six hour and 33-minute spacewalk.

“And when we were done [eating] we didn’t go watch a football game on TV,” Ross said. “We went to the window and watched the Earth go by at five miles a second. I can’t imagine a better way to celebrate a Thanksgiving unless you’re with your friends and family.”

The food-centric holiday is celebrated every year on board the International Space Station. Astronauts may not spend hours in the kitchen preparing food, but that doesn’t mean they don’t feast on traditional Thanksgiving offerings. Seen in this image is the Expedition 50 crew members celebrating Thanksgiving in 2016 with rehydrated turkey, stuffing, potatoes and vegetables.

Ross remembers looking out the window after enjoying Thanksgiving dinner with his crewmates on board Atlantis and dreaming about all those places down on Earth he hadn’t had the chance to visit yet. “Thinking of the people down there with their customs and what they were doing—it was just an incredible experience especially for my first time on orbit to see what I consider to be a God’s eye view of the beautiful planet we live on called Earth,” he said.

Ross mentioned the holiday feast lasted just about as long as a regular meal would. The crew had prep work to do for the spacewalk scheduled for the next day. That spacewalk would be Jerry’s first of nine spacewalks in his NASA career. 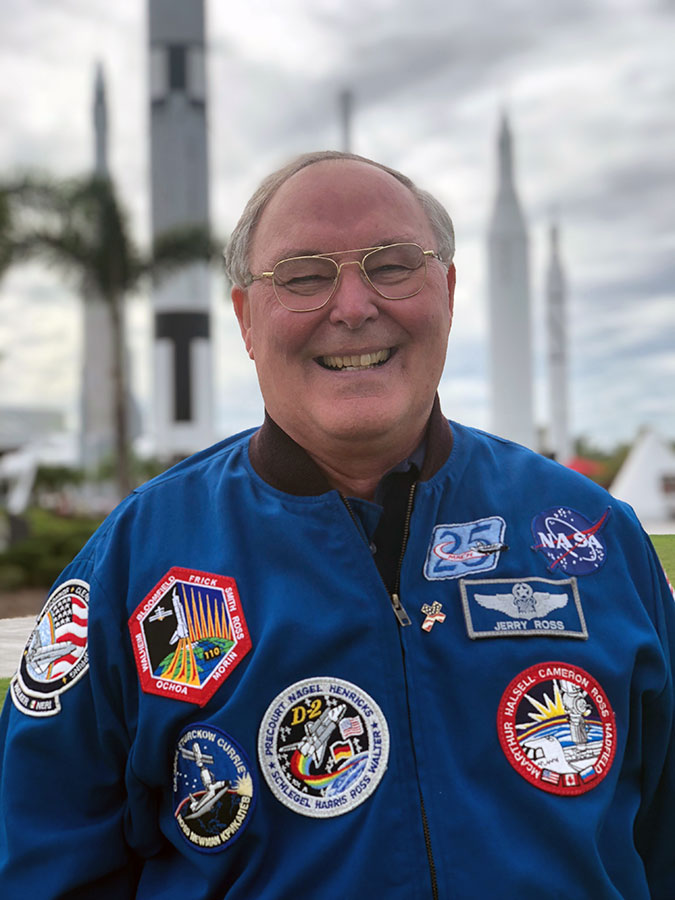 Jerry Ross is a veteran NASA astronaut and joint record holder for most space shuttle flights. He is one of dozens of astronauts who make guest appearances at the Astronaut Encounter program at Kennedy Space Center Visitor Complex.