Every summer, our Education team looks forward to the arrival of hundreds of campers as students from all over the world travel to Kennedy Space Center to participate in Camp KSC®. This year, sadly, health and safety concerns forced us to scrub the scheduled launch of camp. However, in the NASA spirit of “failure is not an option,” we did not give up. Instead, we changed the mission from an onsite gathering of young space enthusiasts to a virtual camp. Since this was our first-ever attempt to deliver our very interactive, hands-on STEM camp in a virtual format, we were not sure what to expect.

At first, only a few people signed up for camp, but as the word spread, enrollment skyrocketed (if you will excuse the pun) and our team went into overdrive to get everything up and running. There were a few stressful moments as we learned new activities, shipped out supply kits and overcame technological challenges, but teamwork proved the key to success. On July 28, 2020, at 10:00 a.m. Eastern time, Virtual Camp KSC welcomed its first class of junior astronaut candidates to the Kennedy Space Center and set out to complete 19 missions in just 3 days.

“We’re all pioneers,” was our message, and feedback from the campers and their parents helped us to make the camp run better and better as we all learned together that virtual camp is not only possible, it can be STELLAR. Our campers, ranging in age from about 6-12, were able to launch rockets, build satellites, conduct experiments, solve engineering challenges and use their creativity to learn about the space program and their own part in helping NASA achieve its goals in the future. As for the virtual format…well, here are just a few of the comments we received after camp ended:


I just wanted to take a moment to thank you and the staff for an amazing camp experience. My son had the best time and is already talking about going to camp again. Your program was exceptionally well done and executed extremely well even while having to be hosted in a virtual format. Thank you! This has been the highlight of this entire year for him!

This was a wonderful camp! After a spring of terrible virtual learning I had my doubts (especially with 500 kids) but our son LOVED every minute of this camp. It held his attention for the three hours each day and he would excitedly gather all the materials together before it began each morning. Your live educators did such a good job. He is even more engaged and interested in space travel and science experiments than before.

It’s been an honor, not only for our daughters, but for our entire family, to be part of Camp KSC! We have enjoyed every mission, the amazing facts and information you have shared, and your funny comments!

We cannot thank you and your support staff enough for the amazing Virtual Camp KSC. My son loved it! He said it was the best camp he has ever participated in! The amount of information and number of activities you did with the children each day was amazing.

My seven-year-old loved space camp. This has been such a challenging time for him with all of his favorite activities canceled and such a limited ability to see other children and it was nice for him to have something that was fun and educational and that he really looked forward to.

My three girls absolutely loved the activities and had a great time. With many camp opportunities going away this summer this was a welcome change for us.

My husband and I are raising our four youngest grandchildren - 10, 9, 8, 5. We just finished the three days of Space Camp with you! All of the children said it was a blast; they loved every minute of it!!

WOW!! What an amazing feat to pull off an online camp for over 500 children…this camp was AMAZING! You and your team did such a remarkable job. We are so glad we got to be a part of the first NASA online space camp for kids. You did a great job acclimating to the current times and making your camp work. I know all the kids learned so much and had so much fun.


These comments, and so many others like them, inspired us to schedule more camps as we saw the positive impact they were having, not only on the children but also on their families – and on the team of Camp KSC educators who have had the privilege of hosting this virtual camp experience. Campers, thank you for your enthusiasm, your smiles, your shared photos and videos, and the amazing future you are going to build! 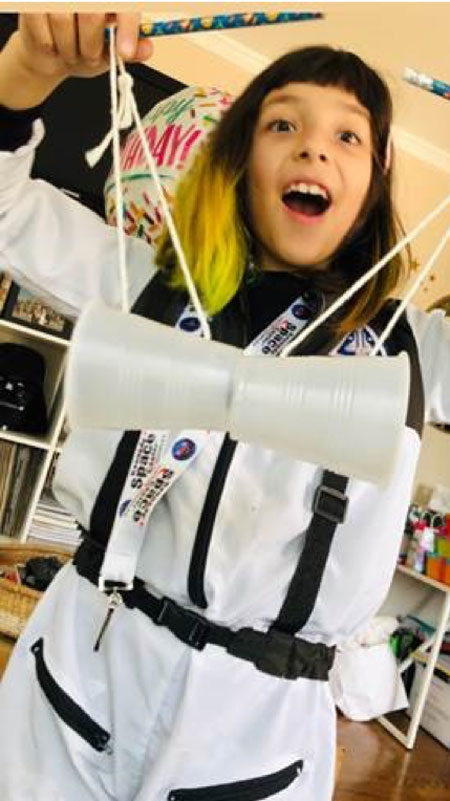 A camper celebrates a successful mission! The mission to build, rendezvous and dock two spacecraft was inspired by the Apollo and Artemis missions to the Moon. Missions like this one included varying degrees of difficulty so that both younger campers and older campers could be challenged. 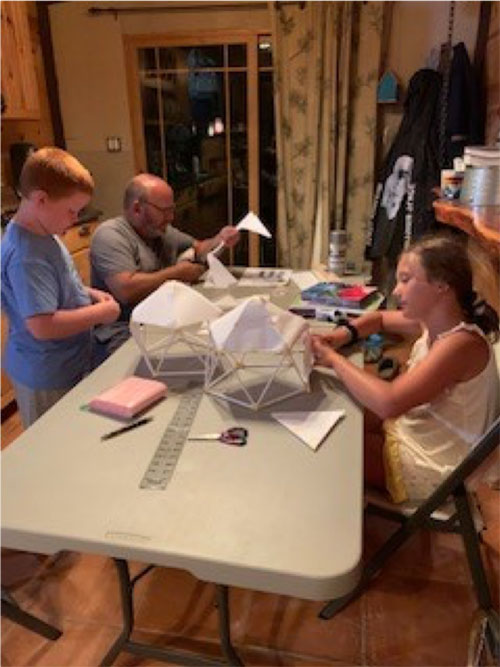 A camp family works as a team to design and build a Mars base. Some campers preferred to work more independently, while others recruited parents and siblings to assist with missions. Many missions were done during the live camp sessions, but design challenges also gave campers a chance to take their time to come up with creative solutions to the mission problems. 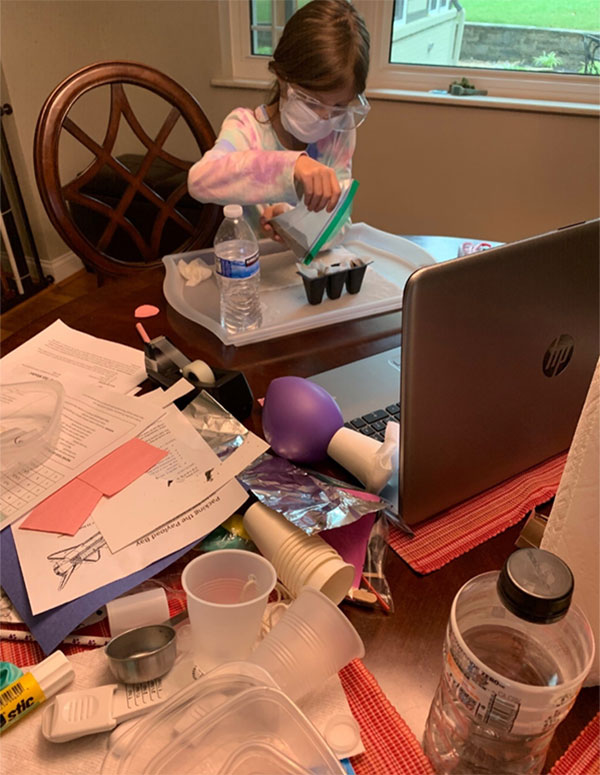 A camper follows instructions to plant microgreens using the same materials as NASA’s Veggie system. Each camp mission focused on a different aspect of space exploration. Botany is important as we learn how to grow fresh food for astronauts on long-term expeditions.