It is not every day you can experience history in the making. Most recently, the launch of astronauts Bob Behnken and Doug Hurley on a SpaceX Falcon 9 to the International Space Station has begun a new era of space exploration for the United States, marking the return of humans launching from American soil after the Space Shuttle Program ended in 2011.

The milestone missions that have defined human’s exploration of space have often begun with a launch from right here at Kennedy Space Center. Relive some of these historic moments by reading the below quotes from the astronauts who helped make history. 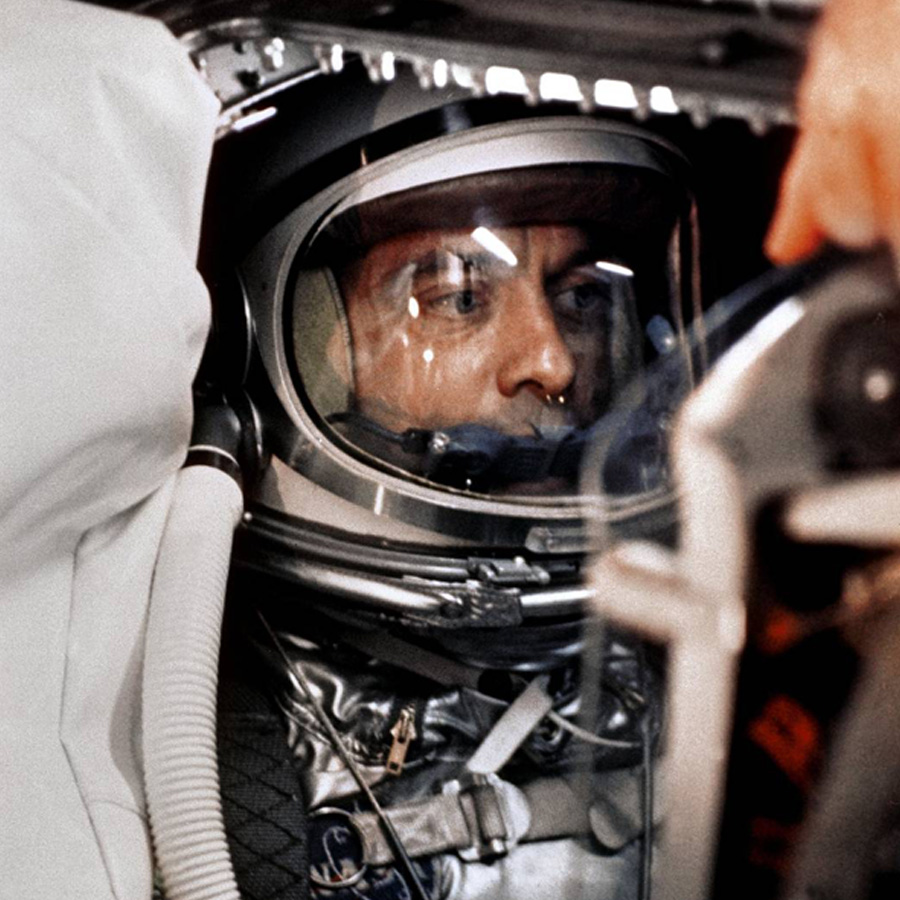 FIX YOUR LITTLE PROBLEM AND LIGHT THIS CANDLE.

After several delays and sitting in the Freedom 7 Mercury capsule for four hours, astronaut Alan Shepard was ready to launch. On May 5th, 1961, he launched aboard the Mercury-Redstone 3, becoming the first American to fly into space. Project Mercury led to many breakthroughs in NASA’s understanding of spaceflight. NASA learned how to put people in orbit, how to fly a spacecraft and that people could live and work in space. Project Mercury paved the way for launching more humans into space in the Apollo, Space Shuttle and Commercial Crew Programs.

Fun fact: A Mercury-Redstone 3 rocket, like the one that launched America to space for the first time, is on display in the Rocket Garden. 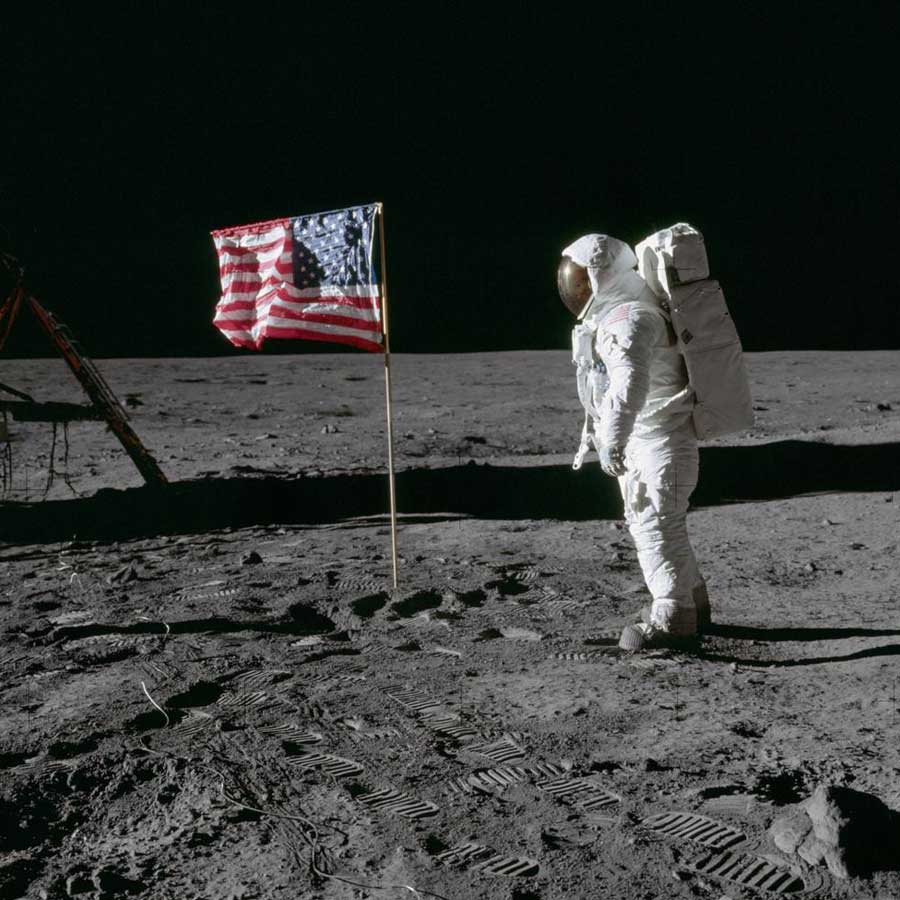 THAT’S ONE SMALL STEP FOR MAN, ONE GIANT LEAP FOR MANKIND.

Not even seven years after President John F. Kennedy made the challenge to put a man on the Moon, astronaut Neil Armstrong, Buzz Aldrin and Michael Collins launched aboard a Saturn V rocket to do just that. Four days after their launch, Armstrong and Aldrin climbed into the lunar module Eagle to begin their descent to the Moon. At 4:17 PM, EDT on July 20th, 1969, the Eagle landed. Six hours later, as Armstrong began climbing down the ladder he proclaimed “That’s one small step for man, one giant leap for mankind.”. On July 24th, when the Apollo 11 crew safely splashed down near Hawaii, President Kennedy’s challenge had been met. Humans had taken the next step in space exploration, by taking a step on the Moon.

Fun fact: View a recreation of this important moment in time at the Apollo/Saturn V Center. The Moonscape exhibit shows a scene from Apollo 11 when Buzz Aldrin and Neil Armstrong planted the American flag on the lunar surface. This exhibit includes the Lunar Module 9 (LM-9), an authentic lunar module created for the Apollo Program. 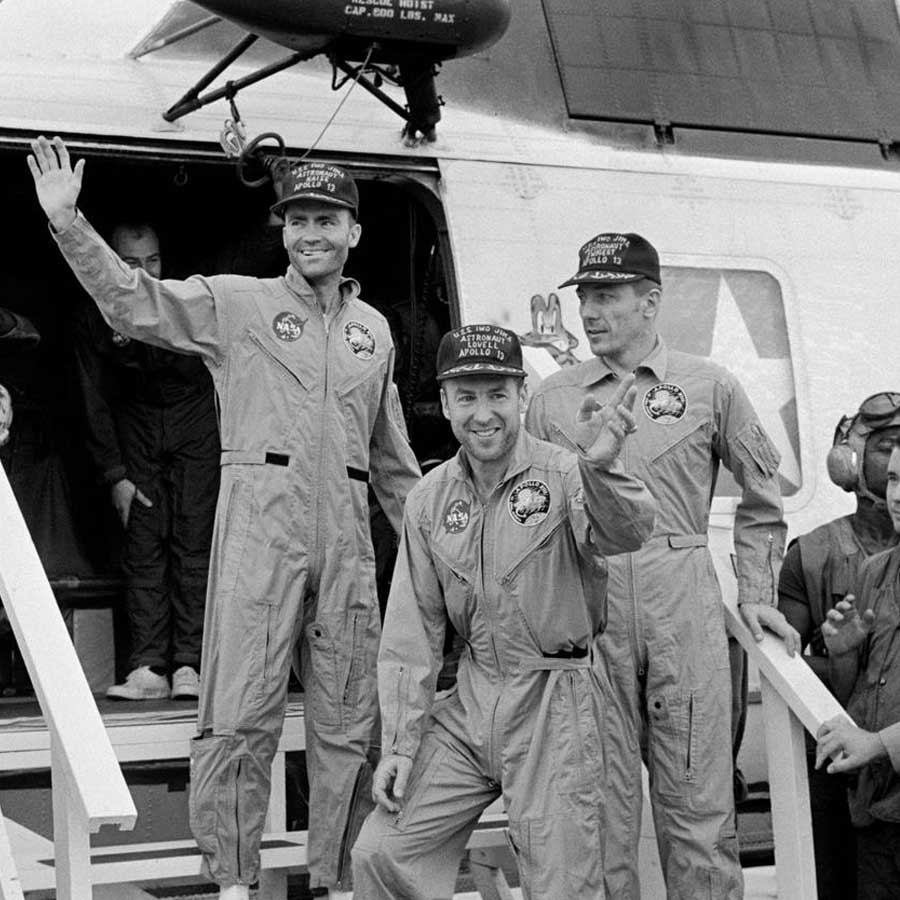 HOUSTON, WE’VE HAD A PROBLEM HERE.

Often called the “successful failure”, the Apollo 13 mission is a testament to NASA’s commitment to bringing their astronauts back home safely. After an oxygen tank failed two days into their mission, the crew of Apollo 13 and Mission Control in Houston improvised changes to the lunar module. With these modifications, the crew was able to survive, under great hardship, until splashdown in the ocean.

Fun Fact: Does this quote seem a little off? Many have heard the erroneous quote “Houston, we have a problem.” which was popularized in the movie Apollo 13. The full quote was first spoken by Jack Swigert. When Houston requested the crew to repeat, Jim Lovell echoed Jack and responded "Houston, we've had a problem here.” 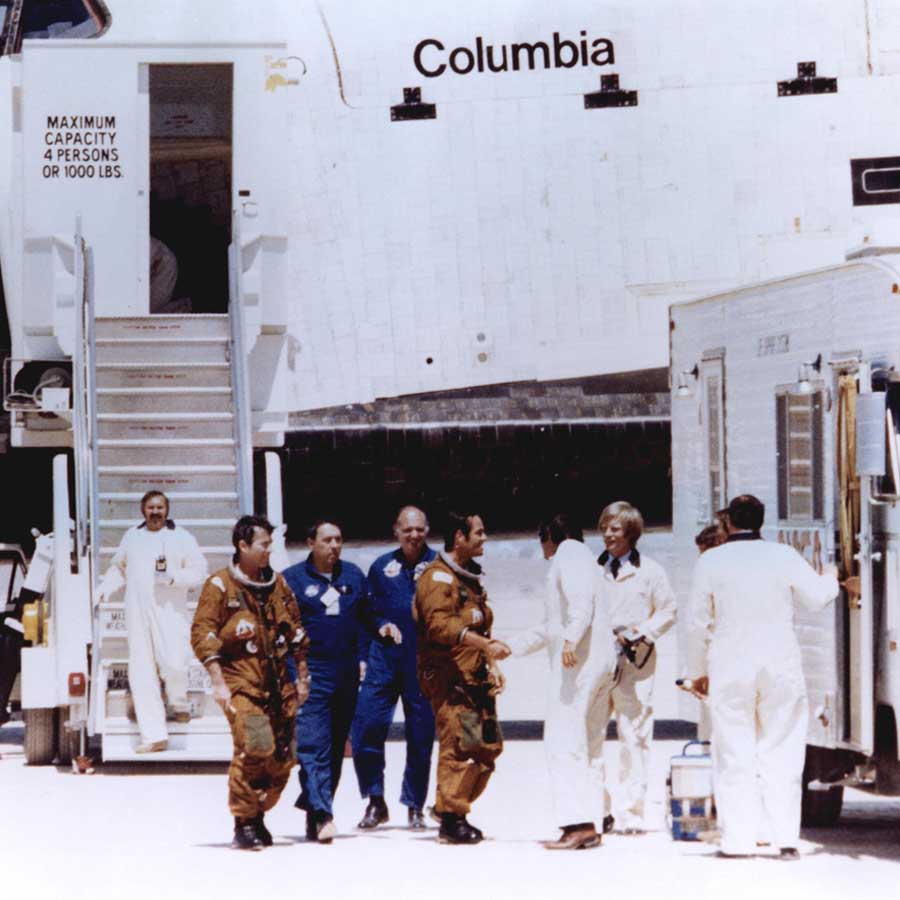 THE DREAM IS ALIVE.

Two days after the first launch of the Space Shuttle Program, astronaut John Young piloted the orbiter Columbia to touch down in southern California. Upon this successful mission, John Young remarked that indeed, the dream is alive. The safe return of the crew and orbiter marked the beginning of a new age of spaceflight which would include wheeled landings and the reuse of mission-proven spacecraft. The Space Shuttle Program supported the development of the International Space Station and gave the world greater access to space.

Fun fact: Interested in the Space Shuttle Program? The original orbiter Atlantis, one of three remaining orbiters is at Kennedy Space Center Visitor Complex, displayed as it would have been seen in space, rotated 43.21 degrees with payload doors open. 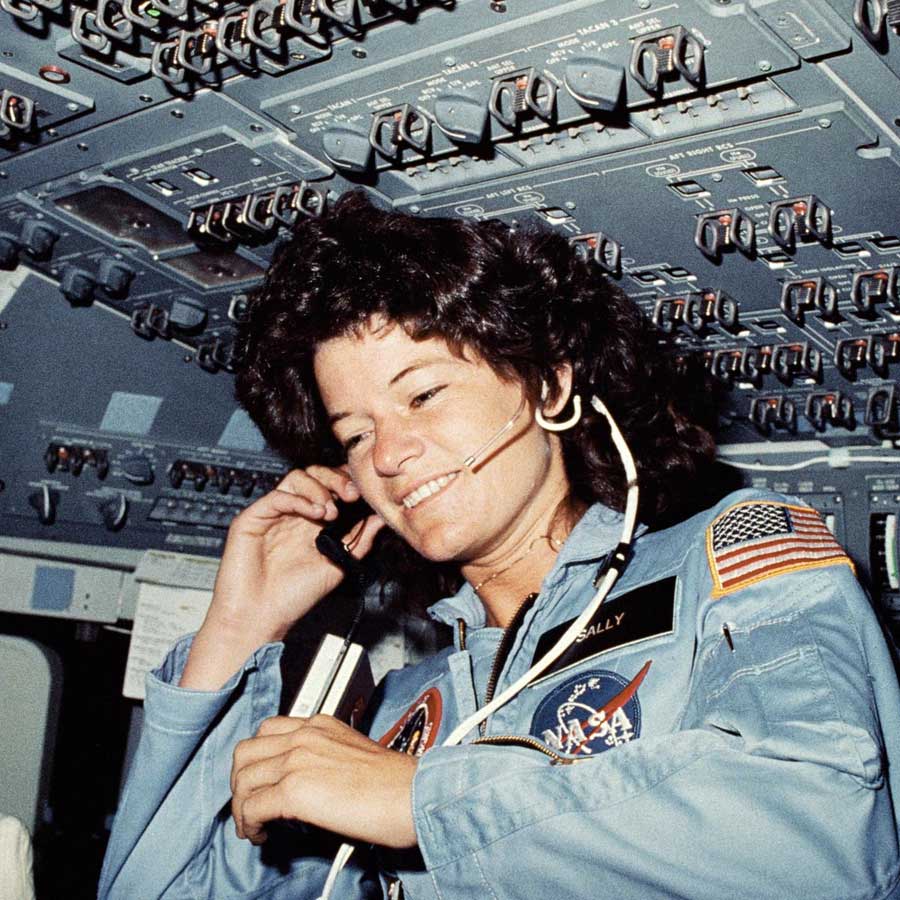 THE STARS DON’T LOOK BIGGER, BUT THEY DO LOOK BRIGHTER.

In 1983, astronaut Sally Ride launched aboard space shuttle Challenger and became the first American woman to go to space. Dr. Sally Ride’s flight made her a hero to generations of girls. After retiring from the astronaut corp., she cofounded the Sally Ride Science organization to encourage young girls to enter science, math, technology and engineering fields. Her legacy continues to inspire girls to pursue their interest in STEM fields, promising a bright future for women in space exploration. 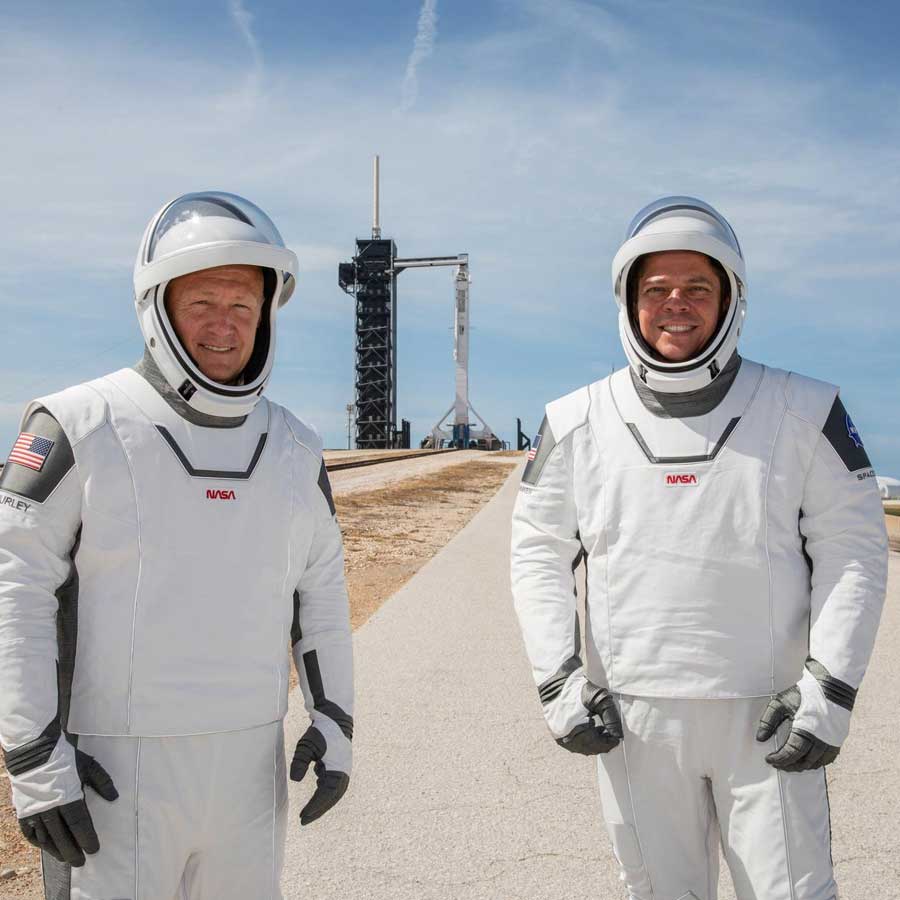 CONGRATULATIONS, SPACEX, YOU GOT THE FLAG.

At the end of the final space shuttle mission, the crew of STS-135 mounted an American flag on a hatch inside the ISS’s Node 2 or Harmony which lead to the orbiter Atlantis. This was the same flag that flew on the first space shuttle mission, STS-1. The flag has remained aboard the ISS, until the next crew of astronauts who launch from the U.S. would return. Thanks to NASA’s Commercial Crew partner SpaceX, we’ll be able to see this flag fly over American soil once again.


Whether you have witnessed each of these milestone moments in history or are excited for the future of space exploration, come experience the history and future of NASA at Kennedy Space Center Visitor Complex. Explore authentic artifacts and spacecraft from early space programs in Heroes & Legends. Get a close-up view of space shuttle Atlantis and explore 60 interactive exhibits celebrating the NASA Space Shuttle Program. Learn about the future of NASA’s space exploration for low earth orbit, the Moon and beyond in NASA Now. Visit today and join the journey.