This summer, Kennedy Space Center Visitor Complex is celebrating the 50th anniversary of Apollo 11, the first time humans walked on the Moon. The Apollo/Saturn V Center showcases iconic Apollo artifacts and tells the story of NASA’s Apollo Program. This year, we’ve added even more to see and enjoy. There’s no better place to relive the first footsteps on the Moon.

Inside, you can explore the attraction that’s home to one of the three remaining Saturn V Moon rockets. Brand new interactive displays and touch screens tell the story of the Apollo Program using realistic animation and fun challenges. There’s so much to see and do, but here is a quick guide for the new and iconic must-sees:

Can you imagine what it was like to launch to the Moon as one of three crew members? The command module was where astronauts lived, worked and slept throughout their mission. This new display allows you to peer inside a real command module and learn more about the astronauts ride to the Moon. The command service module (CSM) on display is CSM-119 and was used as a backup and rescue vehicle for the Skylab 4 mission. 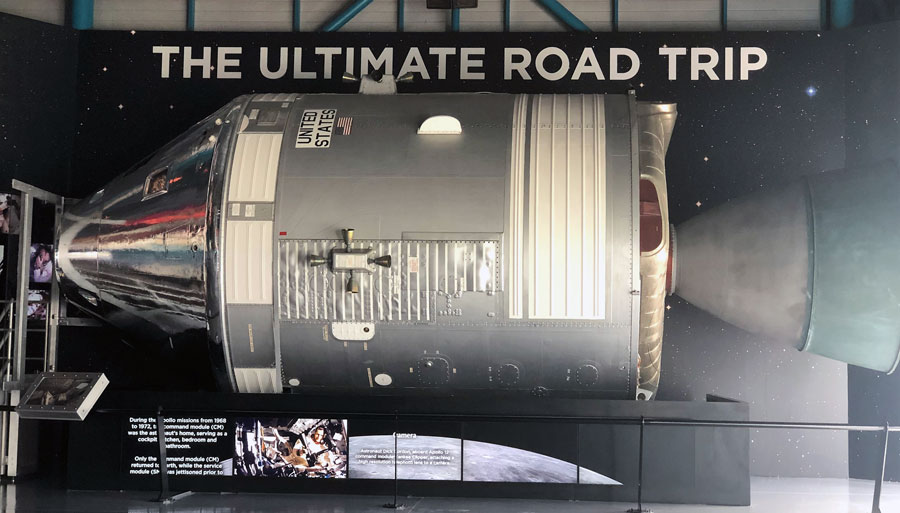 Right outside the attraction is a garden, featuring twelve trees representing the twelve crewed Apollo missions. The trees are descendants of the original Moon trees grown with seeds Apollo 14 astronaut Stuart Roosa carried to the Moon. While you stroll through the garden, the path leads you through a figure eight that represents the slingshot trajectory used to get to the Moon. 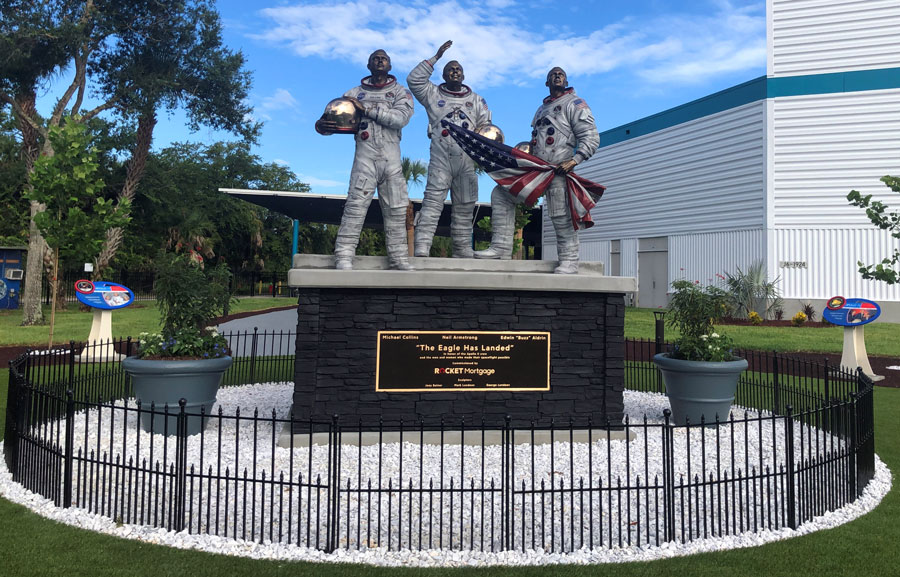 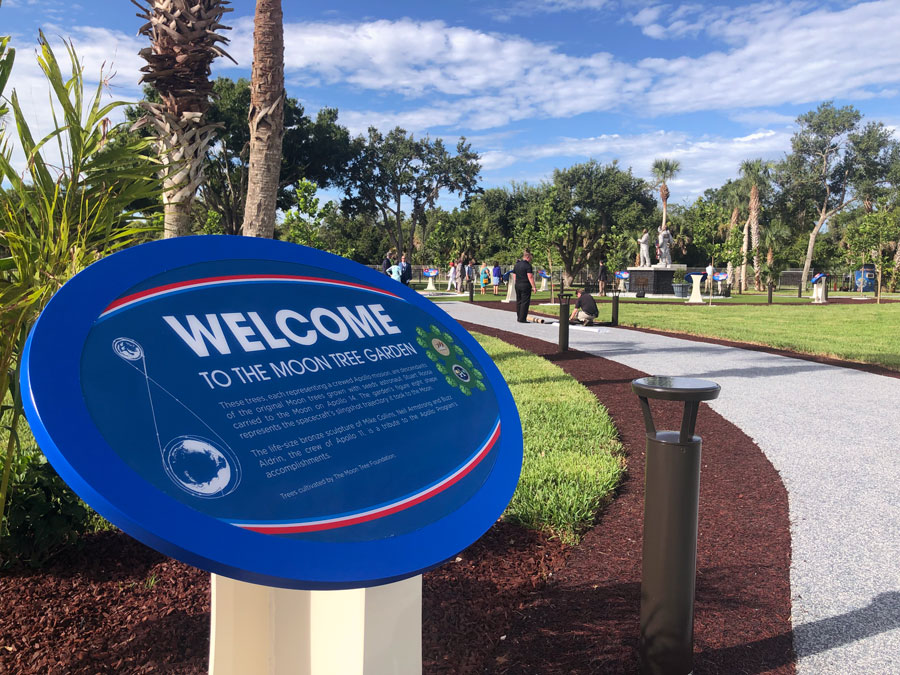 The massive Saturn V rocket is hard to miss, and the new displays dive in deeper to the story of how it was built and how powerful it really was. Interactive, touch-screen monitors show how it was stacked for launch inside the Vehicle Assembly Building, let you launch the rocket and interact with 3D displays of each stage. 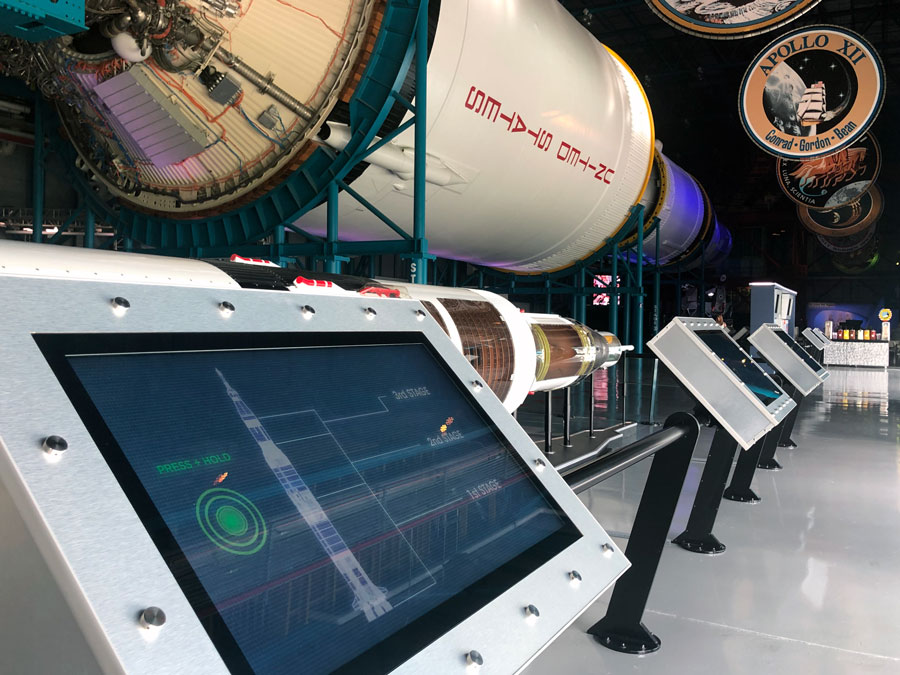 Getting to the Moon

What did it take to get to the Moon? This display explores the training, education and basic qualifications of the Apollo astronauts and how that compares to the astronauts today. An interactive “Footsteps on the Moon” timeline walks you through the steps leading up to the Apollo Program, as well as the first Apollo missions 7 – 10. The opposite side of this display focuses on Apollo missions 11-17, highlighting what we accomplished on the Moon and what that taught us about Earth. An incredible touch-screen Moon explores each mission landing site and shows what the astronauts left behind on the Moon.

Another brand-new feature is a replica of the lunar surface, showing Apollo 11 astronauts Buzz Aldrin and Neil Armstrong planting the American flag on the surface of the Moon with a real lunar module next to them. The Lunar Module 9 (LM-9) was intended to fly on Apollo 15, but was replaced with a modified version when the lunar rover was added to the mission.


A few steps away, you can leave your own footprints on the “Moon” and look inside the lunar module cockpit, where astronauts lived while on the lunar surface.

At these two displays, you can choose from six different holograms, including how the lunar rover was folded up to fit inside the lunar module for launch or why NASA called the rotation of the command service module a “BBQ roll” while it traveled to the Moon.

Before entering the Lunar Theater to watch the landing of Apollo 11, step inside a 1960s-era living room or bar, take a seat and imagine what it was like when the world forgot about borders and united as humans in the pursuit of discovery.

All of these new displays complement an already incredible attraction. It’s easy to spend a couple hours here, so the Moon Rock Café is a great option for lunch. While you eat, watch a film honoring the Apollo Program with incredible projection mapping on the side of the Saturn V rocket. Before heading out, be sure to bring home a keepsake from The Right Stuff gift shop.

We’re celebrating Apollo 11 this month, so now is a great time to visit and experience all things Apollo! Check out all of our upcoming events and purchase your tickets in advance before they sell out.