Attraction Spotlight: Sliding Back to Earth in Space Shuttle Atlantis®

When you visit Space Shuttle Atlantis®, you will notice the slide. Whether you slide down the slope yourself or hear the laughter of kids experiencing the thrill on loop, it is a guest favorite of those visiting the attraction. The slide represents an incredibly important part of the space shuttle’s mission – returning back to Earth. For first-time visitors, this is an experience you will not want to miss. 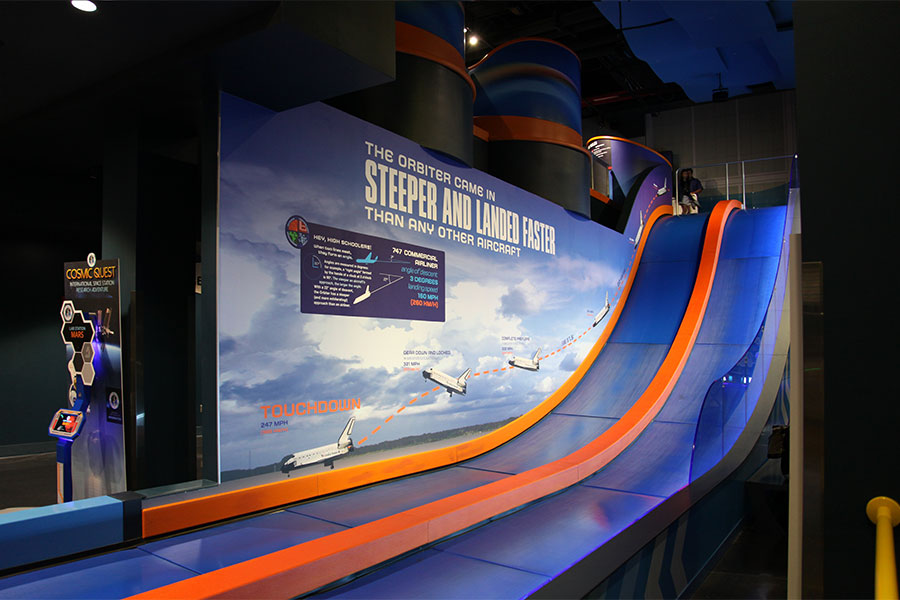 The Space Shuttle Program was groundbreaking. For the first time, spacecraft could be reused, saving time and money. Therefore, the shuttle had to launch like a rocket and the orbiter had to land like a glider. Because the returning orbiter was essentially an unpowered glider, the process had to be perfect—there were no second chances.


What is the significance of the slide?

On the top floor of Space Shuttle Atlantis, you see the orbiter “in space,” learning of her missions while in low-Earth orbit. In order to return to “Earth,” or the ground level of the attraction, you must initiate deorbit burn. Deorbit burn is the term used when the orbiter fires its orbital maneuvering system engines to begin its descent back to Earth.

At the visitor complex, guests can experience their own landing by riding the slide to the first floor. Just as the space shuttle produces two sonic booms, you too will you create your own sonic booms by jumping on a pneumatic pad. Then, line up with the runway and glide, or rather slide, down the 22 degrees steep-sloped re-entry slide to a safe landing below.

The exciting adrenaline rush the slide brings is only a small peek at how the astronauts felt during their real landing. Be sure to learn even more about the Space Shuttle Program inside Space Shuttle Atlantis at Kennedy Space Center Visitor Complex!


Remember: you must be 38 inches tall to ride the slide! Children must be supervised by a parent. If a trip down the slide is not for you, you can always take the ramp—a ramp that declines in an S-turn, also reminiscent of a shuttle landing.